Should the government commission broad policy reports from social scientists (e.g. management scholars) and should we write such reports? That is the topic for this slightly off-topic blog post, bearing only vague connection to reasoning and no actual relationship to organizational reasoning.

Several funding bodies in Finland (including the Academy of Finland) recently funded a 700.000 euro report on "The model for sustainable growth" by a well-known (celebrity) philosopher Pekka Himanen (of The Hacker Ethic fame). To be fair, he is not going to pocket all the money since it goes for flying celebrity intellectuals and experts to Finland and organizing a series of seminars on the topic of the report. The report does not seem to have much to do with universities or the academia. Indeed, one might question why the Academy of Finland (which is supposed to fund scientific research) is putting some money behind the production of this kind of political pamphlets.

What if we would write the report?

Today, the main Finnish daily (Helsingin Sanomat) had an interesting editorial pondering why such a report was not commissioned from sociologists, offering also some reasons (in Finnish here). This raises some intriguing questions. Should the government commission a vision-paper on "sustainable growth" from a business school? What if the faculty at Aalto University School of Business (where I work) would decide to produce a competing report on the topic for free just to show some return for the tax payer money put in the university system? And how different would these two reports be?

I imagine they would be vastly different. Universities cannot produce political essays or opinion pieces without seriously undermining their legitimacy (professors may be able to do that as individuals). Although science can hardly be totally apolitical, the genre of social science is distinct from political texts  (at least now that marxists have been silenced). The academia has a certain way of thinking. To stay in the vocabulary of this blog, we could say that the academia has strong norms concerning acceptable ways to reason and make arguments.  Academics tend to make reserved claims, commonly supported with references to earlier studies, a compelling line of argumentation, and even some analysis of carefully collected empirical evidence.

If we were to produce a report on "sustainable growth" it would need to be grounded on empirical evidence, either a synthesis of published research or own data collection efforts.  In contrast, I do not expect Himanen to produce or refer to much empirical evidence to back the vision he and his team will produce. Also, this type of reports are only seen to succeed when they contain what the client (government) want. Universities can better maintain their independence and legitimacy when they are not required to market their services to the government and paid to produce 'results' desired by it.

What is a 'model of sustainable growth' anyhow?

I expect my fellow business school professors would question the whole idea of having a 'model' for sustainable growth. Surely the government can make some interventions that could improve the prospects of growth in the future. But I believe such interventions would add up to a coherent "model" only on the level of rhetoric. Why would 'sustainable growth' be a single problem that can be solved with a single solution? It seems its a series of rather disconnected challenges with rather disconnected potential solutions. The whole topic smells slightly fishy as it implies economic and ecological sustainability to be unproblematically aligned elements of the broader rhetoric category of 'sustainability'.

More damningly, an evidence-driven report produced by university professors on sustainable growth would most likely be boring in the extreme. It is not like governments have not thought about this before: higher education, competitive R&D, capabilities in marketing, industry clusters, ecosystem of competitive business services, attracting foreign investments, and so on. Visionary reports politicians want are more akin to journalism and marketing pitches than studies of anything. Although many social scientists are capable marketers and would make great journalists, I am not sure we should expect universities to be good in these domains.

Luckily, most countries are blessed with a few celebrity philosophers.

Written by Henri at 4:40 PM No comments:

Sensemaking is a mess. Why? 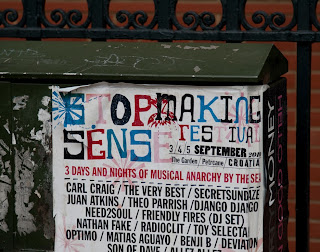 Sensemaking is perhaps the most ambitious concepts in organization theory. It purports to capture the essential features of individual and social aspects of consciousness and agency. Perhaps due to this ambition in the scope, it seems almost impossible to say what sensemaking exactly is (see Table below for evidence!). Weick’s work often defines sensemaking indirectly as merely ‘involving’, ‘being associated with’, or ‘being about’. Such claims provide a rich and open ended, but unstructured understanding of sensemaking that allows different readings. Sensemaking seems to suffer from almost complete lack of analytical clarity. It is a truly unique perspective even in management theory in this sense.
Selected claims regarding sensemaking in Weick, Sutcliffe & Obstfeld, (2005, Organization Science)

Why has so little order has emerged over the decades?
Despite widespread attention to sensemaking during the last 30 years, there has been remarkably little progress in terms of analytical clarity of its constitutive elements and their relationships or in terms of accumulated coherent empirical findings. I suggest some reasons for this. First, sensemaking means two different things. Sensemaking is foremost a perspective, a set of prescriptive methodological commitments that addresses how researchers might or should design and conduct research. But, at the same time, sensemaking is a process, an observable phenomenon captured by a set of descriptive empirical observations and falsifiable theoretical claims that put forth generalized predictions concerning the observations. While this duality of meanings would not necessarily hinder our knowledge creation, the sensemaking perspective is ridiculously synthetic, with little encouragement for analytical work.
When I say synthetic, I mean that the sensemaking literature puts everything together. Weick (1995) tells people that cognition is driven by actions, bracketing, noticing, editing, interaction, and identity. And a few other things. Sensemaking literature asks researchers to take this synthetic soup of concepts and phenomena to explain real life cases and narratives. Although sensemaking is about identity, the synthetic ethos calls researchers to ignore minute details such as the alternative definitions of 'identity' and ways through which 'identities' relate to actors' motives or judgment.
A prime example of the synthetic tendencies is the passage in Weick's 1995 book where he elaborates the differences between sensemaking and interpretation:


The process of sensemaking is intended to include the construction and bracketing of the textlike cues that are interpreted, as well as the revision of those interpretations based on action and its consequences.(p. 8)

From analytical perspective it seems dubious to define concepts that are just like other concepts plus some stuff that influence them. I cannot see physicists all worked up about studying "dynamism" that is like acceleration but also intended to incorporate the interactions through which acceleration originates from and the subsequent changes in acceleration based on the collisions of the object due to its past acceleration. Sensemaking purports to be different from other more elementary concepts simply by synthesizing them into a big fuzzy mess.

My war against disorder
I will later blog about a paper of mine on sensemaking, where I tried to offer a critical look into the sensemaking process and elaborating a more analytical account of its cognitive core processes based on the various literatures on reasoning. Given the synthetic rather than analytical focus of the literature, it was unsurprising ASQ reviewers were incensed because I misrepresented Weick's work by leaving out some key aspects of it (all three reviewers found different critical aspects I had ignored). Also for some reason the sensemaking scholars did not appreciate my characterization of the literature as a confused mess (who would have thought; they even wondered why I attached the above table!).
If we cannot rephrase any aspect of sensemaking without incorporating every aspect mentioned by Weick, then we will never have any analytical advance on the phenomenon. If we need to fully theorize action (human agency) in order to be able to discuss sensemaking, no theory will ever evolve. And let's face it, sensemaking itself has never been a theory. What sensemaking offers is a convenient term to capture the black box between inputs and outcomes for periods of interpretation and revision of beliefs (e.g. Maitlis, 2005). In numerous publications, it is difficult to tell if 'sensemaking' is anything but a synonym for interpretation, thinking, appraisal, or holding conversations.
References