Organization theory seems to be undergoing some type of identity reneissance. Identity work is very popular, and plenty of cultural explanations use the concept of identity as part of the explanation. In popular management thinking, the concept of 'organzational identity' is now used in parallel with 'organizational culture'. This blog post, however, is of interest only to academics.

It is hardly controversial to think that actors have identities (self-understandings), a set of beliefs concerning themselves (identity beliefs). However, there is often a temptation to treat identities as roles, singular templates that somehow define what actors are. In such talk, a priest is bound to have the identity of a priest and a professor has the identity of a professor.

Identity is seen as central to entrepreneurial attempts to theorize need for change, as it is through subsequent identification by individual and/or collective actors that new logics can become institutionalized ['identification' here remains unclear to me]

This study deepens understanding of the relations between identity construction and institutional logic reproduction and translation by demonstrating how identity can be contested and reconstructed, or “worked.”

The above quotes are from Lok's introduction. As is typical among institutional theorists, identity is offered as a some sort of explanation for behavior. Priests behave in a certain way because they have priest identity. This is a very neat sociological explanation, but for one thing. It explains nothing.

I am not going to go into the details of Lok's article. It is a nice qualitative study and it is perhaps unfair to take it here as a representative of the broader malaise. The problem I have is with his framing, and the article is chosen simply because its new and published in the highest impact factor management journal.

The identity-based non-explanation can be summarized as follows: 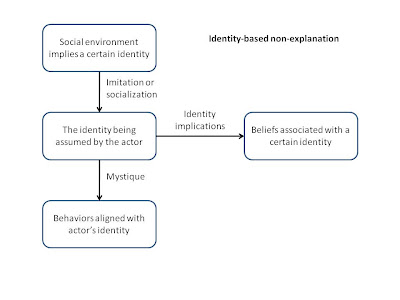 Can a better explanation be devised? Would it have anything to do with reasoning? YOU BET.

Now again, but without holistic identities

A much clearer story can be told if we accept the rather mundane argument that in reality actors never assume a single stereotypical identity and that all identities actually consist of multiple identity beliefs, beliefs concerning the self.

It then happens that beliefs actors have about themselves are quite likely to be connected to beliefs one has more broadly. If one believes that animals have souls and it is quite cruel to eat them, then it may also happen that the individual has a self-belief that by abstaining from eating meat he/she is an ethical and good human being. Does the vegeterian identity here explain the behavior (not eating meat)? Or might we device a more elegant explanation by saying that eating meat just does not seem like a very rational thing to do given the beliefs of the individual? 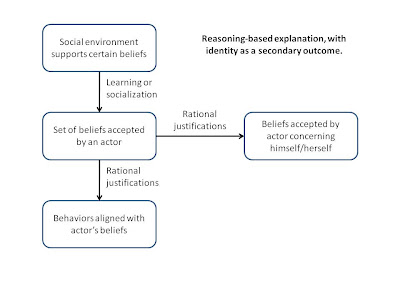 One can say that plausible identity beliefs (e.g. vegetarianism is a good thing) do influence how people think more broadly (farming meat is unethical). But it seems more apt to state that identity beliefs are only plausible once they conform to broader beliefs accepted by actors.


Identity is seen as central to entrepreneurial attempts to theorize need for change, as it is through subsequent identification by individual and/or collective actors that new logics can become institutionalized ['identification' here remains unclear to me]

Even if the explanations in instutional theory amount to unnecessary 'identity mystique' and/or the explanations have gotten causality the wrong way around, there is at least one clear way in which identity beliefs matter. Intuitively, identity beliefs seem to be stable. It seems that actors are much less likely to reject beliefs that strongly relate to our understanding of ourselves than other beliefs (there must be research on this as well, but I am too lazy busy to look atm). The claims concerning the centrality of identity are therefore probably correct, but the role identity has in the initial changes in industries is likely to be exagerated by accounts that treat identities as holistic entities.

I am thinking about writing a paper concerning the aggregation mystification that results from theorization on the level of aggregate concepts (identities) rather than their constitutive parts (identity beliefs). Aggregate concepts are seldom suspect to reasoning-based explanations whereas the effects of constitutive parts can be largely explained by simply positing actors to be reasonable. Aggregation mystification represents exotic theoretical arguments that result from intrepreting data on an unwieldy level of analysis.
Written by Henri at 8:18 PM No comments: